Temple of Horus at Edfu

Located on the west bank of the Nile in Upper Egypt, 100 km south of Thebes, Edfu contains a well-preserved temple complex devoted to Horus, the falcon god. A rectangular colonnade connects with a 36 meter-high twin pylon or gateway, leading to the temple's inner sanctuary.

Considered to have the most intact structure of any ancient Egyptian temple, Edfu's Temple of Horus was built over a 200-year period, starting with Emperor Ptolemy III in 237 BC. The site had previously contained a much older temple complex from the New Kingdom (1570-1070 BC; Hobson 1987).

Both the temple and its entrance pylon are covered with with relief sculptures made in 57 BC, showing Ptolemy XII defeating his enemies (Clayton 2006). This is similar to decorations on the first pylon at the Temple of Isis at Philae.

When the French expedition visited Edfu in 1799, the site was partly buried in sand, as shown by Denon's drawing. The view in the drawing faces diagonally across the colonnade pavillions, showing details of  plant motifs (including papyrus and palms) on both columns and capitals. The twin ridges of the pylon are visible at left center.

Edfu was the capital of the second nome of Upper Egypt, an important regional center from the Old Kingdom, partly due to the large area of fertile land belonging to the town, partly to the fact that Edfu was situated near the frontier between Egypt and Nubia, though not as close as was Philae. It was probably a starting point for desert routes leading to the Kharga Oasis in the west, and to the mines of the Eastern Desert and the Red Sea coast in the east. Edfu had an attractive geographic location, elevated within the floodplain in Upper Egypt, so logically it would have attracted settlers at that time. Edfu is located near Hierakonpolis or ancient Nekhen was a major pre-dynastic city.

The Temple of Horus at Edfu is the best preserved of the ancient Egyptian temples and one of the most famous of “pharoanic monuments.”

However, no Egyptian Pharaoh ever laid eyes on it.

It was built by the Greeks after the last native Egyptian Pharaoh ruled.

Ancient Egyptian civilization had almost a thousand years of history between the last of the Pharoahs and the beginning of the Coptic Period with the merge between the latter two periods somewhat overlapping during the course of a century or more.  Coptic Egypt was Egypt’s Christian and Byzantine period.

This thousand year era is known as GrecoRoman Egypt and is a specialized study of its own.

Many of the so-called Pharoanic Monuments on the tourist trail date from this time and as mentioned earlier, no Pharaoh of Egypt ever saw them.

When the Greeks and Romans ruled, outside of the City of Alexandria, both of these foreign rulers mostly adopted Egyptian architectural styles for their constructions in the country and many of these establishments were just as impressive and massive as anything built by the native Egyptian kings.

The Temple of Horus at Edfu is one of them.

GrecoRoman Egypt dates from 332 BC, when Alexander the Great conquered Egypt. After his death in 323, his successors ruled Egypt under the Ptolemaic Dynasty. This was the last dynasty of independent Egypt. The Ptolemies were Greeks, but presented themselves to the Egyptians as native pharaohs and closely imitated the traditions and architecture of pharaonic Egypt.  The later Romans did much the same.  The final construction work on the Edfu temple was ordered by Cleopatra VII, the last independent ruler of Egypt.

One of the main points of interest of the Temple of Edfu is its very intact ark (shrine), the only known surviving ark from any ancient temple which still remains in a temple sanctuary.  Arks, containing tablets of cult teachings and other sacred objects were a common feature in ancient temples in a region extending from from the Sudan to Jerusalem and into Mesopotamia. 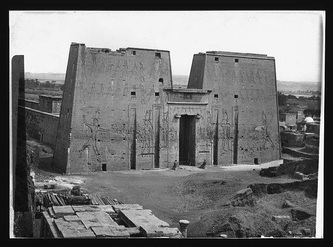 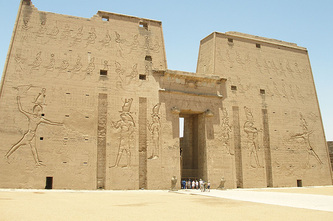 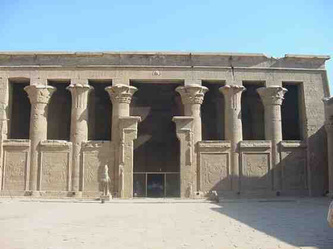 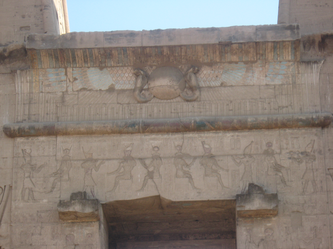