John Marshall, the son of Jeremiah Marshall (born 1731), a linen draper from Leeds, and Mary Cowper (1728 – 1799) whose father was John Cowper of Yeadon, was born in Rawdon on July 27th 1765. Jeremiah had been a Baptist but by the time John was born he had become a Unitarian and attended the same chapel as Joseph Priestley. He was baptised on the 17th August at Mill Hill Chapel, Leeds.

Mary's first two sons died in infancy, and when John fell seriously ill when he was five years old, it was decided that it would be safer if he went to live with an aunt, Sarah Booth, in the village of Rawdon. After being educated at the local school until the age of eleven, John attended Hipperholme School in Halifax.

In 1781, at the age of 16, Marshall entered his father’s linen drapers business in Mill Hill. When his father Jeremiah Marshall died from a stroke in 1787 John became head of the business. He also inherited a new house, warehouse and £7,500 in cash.

A few months before his father died, Marshall heard that two men in Darlington, John Kendrew, a glass-grinder, and Thomas Porthouse, a watchmaker, had registered a patent for a new flax-spinning machine. Marshall visited the men and purchased from them the right to make copies of their invention.

After obtaining two partners, Samuel Fenton, a Unitarian draper, and Ralph Dearlove, a linen merchant, Marshall leased Scotland Mill, a water mill in Adel near Leeds. Early in 1788, Marshall, Fenton and Company, began spinning flax yarns. At first the machines did not perform well. Breakages frequently occurred and the yarn came out lumpy and hairy.

Although Marshall had little technical experience, he spent the next two years trying to improve its performance. He made little progress until he recruited the assistance of Matthew Murray. He had moved to Leeds from Stockton-on-Tees with his wife Mary (1764-1836) in 1789 to work for John Marshall.

They overcame some difficult technical bottlenecks in using cotton spinning machinery to spin flax into linen yarn and by 1790 the two men had created an efficient flax-spinning machine that produced good quality yarn.

In 1790 Marshall terminated his lease at Scotland Mill and paid William Nayor £600 for an acre of freehold land at Water Lane between the Leeds and Liverpool Canal and the Hol Beck, close to Leeds town centre. The site had distinct advantages over Scotland Mill. Transport problems were solved by the Aire Navigation and the Liverpool Canal. Recruiting labour was also made easier as Holbeck and Leeds had a population of over 36,000 people.

Between 1791 and 1792 he constructed Marshall's Mill. Different sources state four or six-storey, a water-powered mill using water drawing water from the nearby Hol Beck, with machines supplanting Yorkshire's previous cottage industry. With a large ware-house, a counting house, stables, a dry house, shops for smiths and joiners and several cottages. Significantly, he quickly abandoned water power, and substituted a 20 horse power Boulton and Watt steam engine. With twenty-eight hand looms, fourteen spinning frames and fourteen carding engines, Marshall, Fenton and Company had an overdraft of £3,783. However, trade was good and by 1793 the 200 workers at the mill were annually producing 85 tons of cloth for sale.

Despite the increasing trade, the heavy investment in machinery had prevented any profits being made. Samuel Fenton and Ralph Dearlove, unconvinced that the venture would ever be profitable, left the partnership. Marshall talked to merchant friends who attended Mill Hill Unitarian Chapel, and managed to persuade two brothers, Benjamin and Thomas Benyon, Shrewsbury woollen merchants, to invest money in the venture.

In 1795 Murray left John Marshall’s employment and set up business nearby, where he pioneered large-scale organisation and new production methods in engineering.

Between 1793 and 1800 (with new partners Thomas and Benjamin Benyon) Marshall's business grew rapidly. They purchased a new mill at Castle Foregate on which they spent £17,000 in buildings and equipment. Besides spinning and bleaching linen yarns for sale, the firm also produced coarse heavy linen cloth such as canvas, hessian and raven-duck. By 1798 half its yarn was woven on its own 150 hand looms, the remainder being put out to weavers in nearby villages. By 1803 Marshall and his partners had a joint capital of over £80,000, and employed over 1,000 workers, with steam engines rated at over 150 horse-power driving nearly 7,000 spindles. No other flax spinner in the country approached this size. By 1804 it produced an extended line of heavy linens in bears and ships, and lighter cloths such as ducks and linens. The success was immense. However Marshall did not find it easy working with the Benyon brothers. By 1795, the latter had a controlling interest, and in 1796 he was a partner (with Thomas, Benjamin and Charles Bage) in building a flax mill at Ditherington near Shrewsbury, which was the first iron framed building in the world. Marshall grew dissatisfied with his minority holding and in 1804 he had enough capital to buy them out. He appointed two men from the works as junior partners, John Hives and William Hutton, who were later joined by a third, Moses Atkinson. 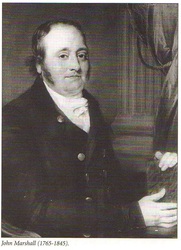 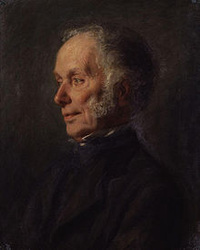 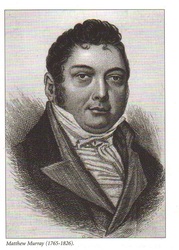 Around 1795 John Marshall had married Jane Pollard, daughter of a William Pollard, a Halifax wool-stapler and linen-merchant. Her three spinster sisters (Ann, Catharine and Eleanor) moved to a house named Old Church, near Hallsteads, by 1829. Jane had met Dorothy Wordsworth while Dorothy was at school in Halifax, and there are references to visits to Hallsteads and Old Church in Dorothy and William Wordsworth's correspondence.

(Their eldest son William was MP for Beverley, Carlisle and East Cumberland. Their second son John was MP for Leeds 1832–1835, and third son James Garth held the same seat 1847–1852. The fourth son, Henry Cowper, was Mayor of Leeds 1842–1843. Their daughter Julia Anne (1809–1841) married Rev. Henry Venn Elliott in 1833 and wrote the words for several hymns in her husband's publication Psalms and Hymns for Public, Private and Social Worship (1835): she was not acknowledged until the third printing (1839) when her initials were added in the index.)

Marshall actually pioneered the foundation of a major new industry in Leeds. Several manufactories Baines observed in 1822, ‘inferior in extent to very few in the kingdom’, had been established for spinning flax for canvas, linen, sacking, thread, etc. Between 1803 and 1815 both Marshall’s Mill (£238,000) and Castle Foregate (£82,000) made healthy profits. Between 1811 and 1814 Marshall briefly manufactured canvas and other fabrics and employed up to 48 weavers but it concentrated on producing flax thread.

In 1815 he built his country seat Hallsteads, near Watermillock on the shore of Ullswater in the Lake District.

Leaving his sons to run the business, Marshall began to take an interest in social problems. He believed that the only way "to promote the improvement of the rising generation was through education". In 1822 he persuaded the owners of several other firms in Holbeck to join him in establishing a school in the area.

During the day children were taught to read and write. Girls also learnt to sew and boys did a course in accounting. Evening classes were held for the older children who worked during the day in the mills. The charge was 3d. a week, or 2d. if they brought their own candle. The teaching methods used at the school were based on those popularized by Joseph Lancaster. Under this system one master taught a select group of older pupils, the monitors, and these in turn taught the rest.

In May 1825, John Marshall began sending children from his mills to day school. At first he selected thirty children aged between eleven and twelve, who he believed would most benefit from schooling. Soon the number had increased to sixty and fifty more of the older children were educated free every Monday evening. Overseers were instructed to send only those who were "well-behaved and wanted to go".

Marshall was also involved in the founding of a Mechanics' Institute and an Literary and Philosophical Society in Leeds. In 1826 he also began a campaign to establish a university in the town. Marshall gave money to the Leeds Library and with Peter Garforth and a small group of Unitarians, helped to re-establish the Leeds Mercury under the editorship of Edward Baines.

In 1826 Marshall decided he wanted to become an MP. He agreed to pay £4,500 for the rotten borough of Rye, but when this deal fell through, he purchased Petersfield for 5000 guineas. Soon after entering the House of Commons in 1827 Marshall became seriously ill. Marshall failed to recover his health and in 1830 decided to leave Parliament and retired to his home in the Lake District. (The house is currently used as the Ullswater Outward Bound Centre.)

From 1838 – 1840 he built his most ambitious project, the Temple Mill, Leeds, a flax mill. Employees at Temple Works worked 72 hours a week, 40% of the people employed by Marshall were young women aged thirteen to twenty, and about 20% were under thirteen. Conditions in the flax mills of that era were extremely hot and humid because of the number of workers and the fact that humid conditions made the flax easier to work. Despite the age of his workers and the conditions in his factories, Marshall is considered to be one of the most liberal factory owners of the industrial revolution. Marshall also installed fans and attempted to regulate the temperature of the mill. In his factories, overseers were not allowed to use corporal punishment on the workers. Underneath the main room of the mill were a series of labyrinths and tunnels, which covered the same two acre area as the floor above. This was known as the undercroft and was used as a type of creche for the mothers that worked but still needed to care for their offspring. Younger children were also down here, snug and warm from the outside harsh weather; they were encouraged to attend day school, and older children that worked in the mill during the day were given free education on Monday afternoons. There were also other people down there such as blacksmiths etc. 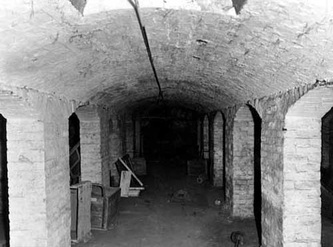 Temple Mill, together with the adjacent Marshall’s Mill, employed over 2,000 factory workers. When it was completed it was considered to be one of the largest factories in the world, with 7,000 steam-powered spindles. Only a generation earlier, the making of yarn had been a traditional Yorkshire cottage industry of hand driven spindles.

On the 1841 census he is shown as living at Upper Grosvenor street, London (age 75), as a flax spinner. With wife Jane (age 70) and children Cordelia (age 35) and Susan Harriet (age 25). Living next door are William and Mary Wordsworth, both in their seventies.

John Marshall died on June 6th 1845 at Hallstead, Penrith age 79. He had homes at Hallstead, London and Headingley. Marshall's estate, after his death, was assessed variously as between £1.5 million and £2.5 million. He was buried in the church adjoining Hallsteads.

Flax spinning was profitable during John Marshall’s management of the business, but the firm declined after 1846 under his sons and grandsons and production ended in 1886.
Sources of information:

Copyright information: Copyrights to all resources are retained by the individual rights holders. They have kindly made their collections available for non-commercial private study & educational use.