Temple Works is a former flax mill in Holbeck, Leeds, West Yorkshire, England. It was designed by Joseph Bonomi the Younger and built by John Marshall between 1838 and 1840.  John Marshall set up a flax business at Marshall’s Mill off Water Lane in 1791, producing yarn and linen cloth. In the 1840s the business was extended to include the new Temple Works.
The office/counting house is on the right in the picture on the right. 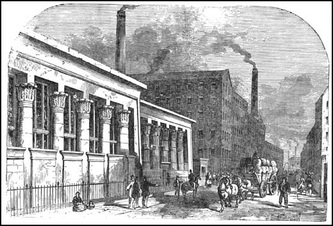 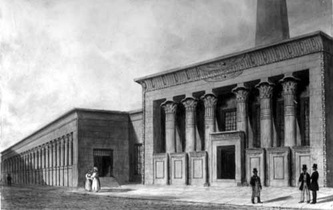 Temple Works, also known as Temple Mill, was designed by Joseph Bonomi the Younger (brother of Ignatius Bonomi) and is based on the Temple of Horus at Edfu in Egypt. David Roberts who was also involved actually went off to the Temple of Karnak on the Nile to learn Egyptian Flax working and returned to build the Temple Mill with John Marshall.

Marshall was heavily involved with Leeds Philosophical Society, which had just recovered an Egyptian mummy Nesyamun, which is on display at Leeds Museum. Marshall’s inspiration for the design of Temple Works was this interest in Egyptology.

The original chimney was designed in the style of an obelisk; sadly this cracked and had to be replaced by a more conventional Victorian stack. Cast iron columns held up the ceiling and doubled as drain pipes. The ceiling itself had sixtyseven large conical skylights which were to allow the maximum amount of light to work by.  To insulate the roof in order to ensure the correct humidity for flax spinning, a layer of plaster was covered with pitch. Earth was shoveled on top to prevent the pitch cracking and grass was seeded to bind the earth together. A small flock of sheep was kept on the roof to keep the grass down. When the building was first created it was said to be the "largest single room in the world". Alongside this feat of construction, Temple Works employed the latest technology including ducts beneath the floor providing air conditioning and housing the power supply for the machinery in the linen weaving sheds above.

"The recently built mill consists of one room, 396 feet long by 216 feet wide, covering nearly two acres of ground. The roof is formed of brick groined arches 21 feet high by 36 feet span, upon cast-iron pillars: an impermeable covering of coal-tar and lime is laid on a coating of rough plaster over the arches, and upon that is a layer of earth 8 inches thick, sown with grass." 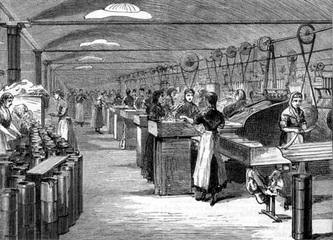 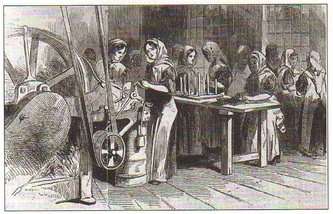 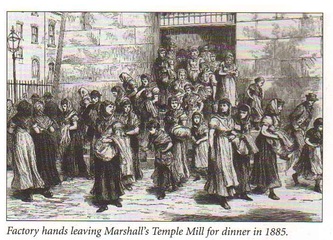 The mill roof was indeed covered with grass. Naturally, this grew so they got sheep onto the roof to graze there. To get the sheep up there, they had to construct some sort of mechanical hoist/elevator as sheep cannot climb steps and certainly not ladders.
This layer on the roof served the purpose of retaining humidity in the flax mill in order to prevent the linen thread from becoming dried out and unmanageable. It would also have become very dangerous as was somewhat flammable in its dryer condition.  A number of processes were carried out in the factory including spinning. Heckling and other tasks which generated dirt and dust were carried out in another mill. 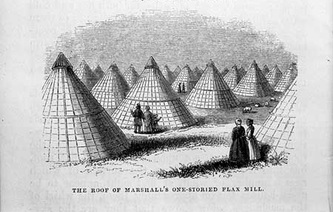 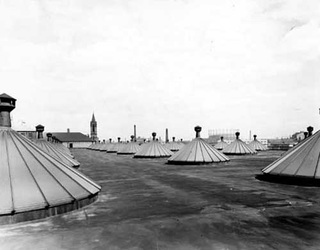 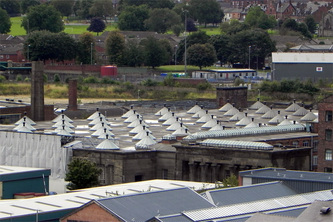 In the 1800s, when the flax industry was at its height, John Marshall was the biggest producer in England, employing 2000.  Between 1870 and 1890, however, the Leeds flax industry collapsed due to overseas competition. Production at Marshall’s ceased by 1886 and the company relocated to America. The Temple Works were taken over by James Rhodes, a clothing manufacturer.

At some point we know there was a box factory here...

In 1953 the Kay mail order firm had the building. (See "Kay's" tab).  They had amalgamated with a local company Samuel Driver which was based here. 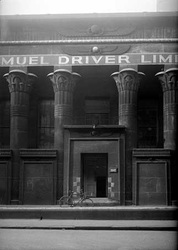 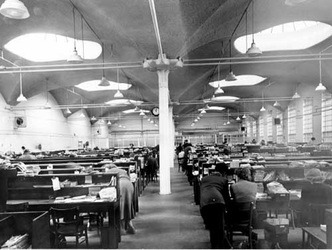 The building next to Temple Works on Marshall Street is Marshall's Mill  which has been converted to offices. The Temple is shown in research as Marshall's Mill which is grammatically correct as it was a mill owned by Marshall. This building is being renovated as part of  the regeneration of Holbeck.

Temple Works is the only Grade I listed building in Holbeck.